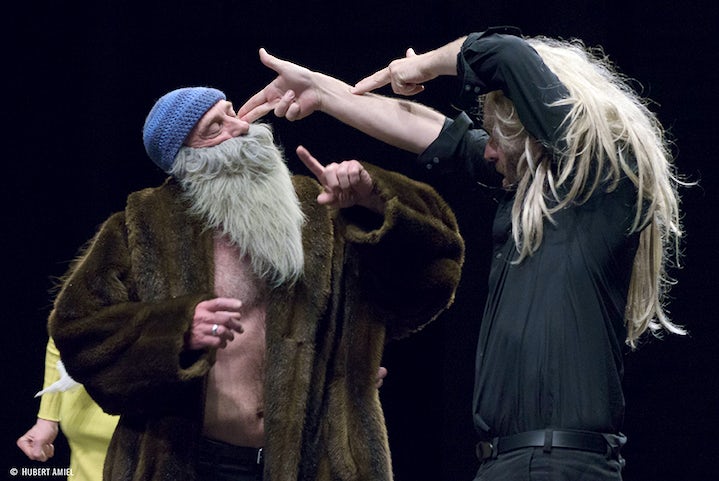 "El pueblo unido jamás será vencido" is a Chilean song, written by the group Quilapayun, and a symbol of unity and solidarity for oppressed peoples, regardless of the country where they fight for freedom and equality. This is what Alessandro Bernardeschi and Mauro Paccagnella's dance piece jubilantly demonstrates in a comical, sublime and moving way. Here, dance bears witness to the personal and the political without resorting to dogmatism. Behind the personal memories, the irreducible collective memory and its complexity show through.

If such fights happen via the body, they undoubtedly begin here. The show is burlesque and dramatic at the same time, on top of being deliciously melancholic. Could Pueblo unido jamás será vencido have come at a better time than the present, with its socioeconomic turmoil, shameless right wing political landscape and commemoration of May ’68? Mauro Paccagnella and Alessandro Bernardeschi, dancers in their fifties and longtime collaborators (to whom we already owe the irresistible duet Happy Hour) worked with the British dancer Lisa Gunstone, also a member of the multinational collective, to compose this trio.

But the song is also rooted in a personal memory that is part of history and is impregnated with the idealistic lightness of today's fifty-year-olds, those who have experienced the echoes of these movements in their home countries, in Italy as well as in the United Kingdom. The intersection of individual and collective memories is therefore the intrinsic object of our work: what are the current reverberations of these idealistic and revolutionary hopes and how can we re-establish the links between the dreams of youth and the overwhelming populism of today?

The stage is bare, apart from two garment racks loaded with costumes and props, stacked boxes, two chairs and not much else. Three sober silhouettes, dressed in black, sway, touch each other, sketch out relationships. The soundtrack offers up the sounds of motor-vehicle traffic and demonstrations. It also includes "Bandiera rossa." The revolutionary song is not the only one in the show, it was named after a piece by Inti Illimani, a Chilean group exiled in Italy in the 1970s. "El Pueblo unido jamás será vencido," is a hymn that expresses resistance to all totalitarianism and calls for unity.

Without turning their show into a political manifesto, the designers and dancers take on the history of humanity. How does it sit with us? Do yesterday’s ideals speak to us today? Are collective struggles ever really distinct from personal struggles and aspirations?

Confrontations, squeaking, rubbing, groping, loud voices: bodies that suggest kidnappings, torture, the rage of struggle, the triumph of idols and death as both a threat and a game. They also dance strange and comical dreams, assume the passing of time, and digest collective memory and superimpose it on personal journeys, using multiple references and with varying degrees of clarity.

Rare are artists like these who know how to reconcile the light and the serious. And who, while in disguise (at Wooshing Machine, we like wigs), remain irreducibly, generously themselves, transforming their complicit presence into an echo chamber for each and every one of us.